Today we would like to feature a wonderful ice cream company that has been a Dream Team Member for many years! Not only do they create astounding [and delicious] products but they also joined the fight against pediatric cancer…until there is a cure! 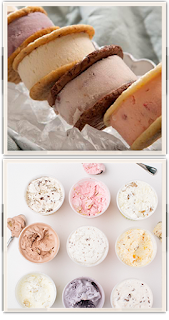 Check out our friends at Nye's Cream Sandwiches, here is their story……

Once upon a time
Ice cream sandwiches were the furthest thing from my mind when I met Christian just before my senior year of high school in Pensacola, Florida. But even then I enjoyed a good meal, and quickly discovered that Christian has a talent for all things culinary. Sharpening his skills at the Culinary Institute of America in Hyde Park, New York, Christian graduated in 1996 and moved to Austin, Texas, where I was finishing up law school. There he began building his resume: working in upscale restaurants, as the executive chef of a large catering company, and later as a private chef. Like many young couples, we spent the early years of marriage joining the rat race in search of….what? I could never quite figure out what was at the top of that ladder.

Change of focus
In 2002, our work-obsessed lives hit a wall when our oldest son was born. I soon realized that my heart would not allow me to return to the office. Thankfully, I worked with a group of attorneys who supported my decision to work from home (or, quite often, my favorite coffee shop). A year or so later, we said goodbye to Austin and moved our little family to Wilmington, North Carolina—a quaint coastal town offering a slower pace and a 15-minute drive to the beach. Nine months later, our youngest son made his appearance. While I continued to work from home, Christian was still logging long hours as the executive chef of a hotel on the beach and later at a country club. After years of Christian missing family dinners, T-ball games and school programs, it became painfully obvious that things had to change. But how?

Just another sandwich?
Opening a restaurant was a life-long ambition for Christian, and suddenly the timing seemed right. We were determined to make this a family affair, and found what seemed like the perfect spot for our neighborhood café. Nearly an acre of land with established gardens would allow the boys to run and (even better) learn to grow something! Determined to turn this fantasy into a reality, I set to work on a business plan and Christian began dreaming up the menu. Sure enough, a handmade ice cream sandwich found its way onto the dessert menu. While we both felt this was a great addition to the menu, we never really imagined the possibilities until….